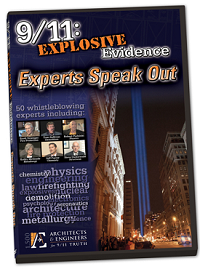 The good news: Thursday night's world premiere screening of 9/11: Explosive Evidence: Experts Speak Out at the University of Wisconsin-Madison filled a major portion of the 250-seat hall. The bad news: Not a single seat was occupied by a UW teacher willing to defend the 9/11 Commission Report!

Dr. Kevin Barrett, who is informally blacklisted from teaching in the UW system due to his research and views on 9/11, wound up "debating" audience members - none of whom seriously disagreed with him.

"I thought this University was a place of 'fearless sifting and winnowing,' a place where the toughest issues are debated freely and fearlessly," Dr. Barrett said. "Yet while three UW professors - Marshall Onellian, Ann Althouse, and Donald Downs - have insulted me in the media, neither they nor any other teacher in the whole university system will defend the 9/11 Commission Report in a public debate...not when they are begged to do so by media outlets and student organizations, and not even when they could pick up $1,000 for just showing up. I think that speaks volumes."

9/11: Explosive Evidence: Experts Speak Out, the new film from Architects and Engineers for 9/11 truth, premiered Thursday in select locations across the country. The film features a wide range of experts including engineers, architects, scientists, and others explaining why the government's version of the destruction of the World Trade Center is indefensible. (One of the featured experts is Lynn Margulis, the greatest scientist the UW has ever produced, who signed the open letter demanding that the University of Wisconsin live up to its "sifting and winnowing" motto, debate 9/11, and consider re-hiring Dr. Barrett.)

In his discussion with the audience, Dr. Barrett asked for suggestions about how to make the University live up to Provost Patrick Farrell's 2006 promise to sponsor a debate on the 9/11 controversies. Barrett said a backer is willing to put up ten thousand dollars for any UW professor willing to defend the 9/11 Commission Report. Tom Spellman of Architects and Engineers for 9/11 Truth suggested that the offer should be "$1,000 to debate, $10,000 if you win." A neutral forensic organization would presumably be brought in to judge.

Dr. Barrett also discussed the possibility of leading an occupation of the campus offices of professors Downs, Onellian, and Althouse. "The professors who insulted me but won't debate me are the ones who should be banned from holding a university position," he said. "In the academy, the one hard and fast rule is that we have to publicly back up all of our claims with reason and evidence in a free, fair, public, transparent debate. Downs, Althouse, and Onellian refuse to do that. Therefore they have no business even cleaning the restrooms in a great public university like this one. Maybe it's time to force them to either abide by the one great rule of the academy, or leave and get a real job."

Suggestions about how to up the ante in the campaign to force a 9/11 debate at the University of Wisconsin may be sent to: UWsifting(at)gmail(dot)com.

The U.W. Madison Sifting and Winnowing Club (mission statement here) meets on the first and third Tuesdays of the month in the Paul Bunyan Room, across from the Rathskeller in the UW-Madison Memorial Union. The club is seeking members, especially UW-Madison students, who may sign up by emailing UWsifting(at)gmail(dot)com.

This semester's activities include talks by world-renowned expert Professor James Fetzer on the anniversaries of the Wellstone (Oct. 25th) and JFK (Nov. 22nd) assassinations, and a screening of Dr. Bob Reuschlein's new film Peace Economics and public speak-out on September 17th. Details here.

Posted by Kevin Barrett at 6:40 PM